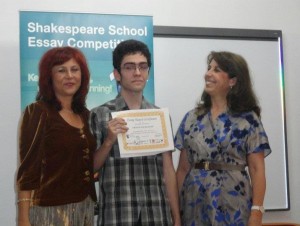 Not Another Conformist Essay, Bogdan Arosculesei

?We are who we choose to be? an old saying goes. We can choose to go with the flow, to be led by the tide, to fly with the wind beneath our wings and follow the trend wherever it takes us; or, we can choose to be different from others. One can be original, break free from constraints and come up with something new, ingenious or even crazy.? As a first endeavor with this genuine idea, we could call it nonconformism.

Sitting in between parallel mirrors, without seeing the beginning and the end of the line, we find ourselves in need to take a step backwards and, just as Velasquez in his painting, ?Las Menninas?, observe ourselves from a different point of view. In order to be able to know ourselves better, we need to transcend our own values, thus granting ourselves the ability to objectively grade others. Only by gaining an eagle eye view can we discern true nonconformists. But, for that matter, how can we truly know what this term means.

The term ?nonconformist? is a very heated subject of debate. In my opinion, one does not have to wish to be a nonconformist in order to become one. Someone”s actions or thoughts are what make him special, and trying to change merely for the sake of change leads people to the point where they become simple copycats of those whom they follow as a role model of nonconformism.

The wish of becoming a nonconformist itself makes one a follower. Being in a continuous race towards the new and the original will eventually make one end up like the rest. This is usually called ?the herd effect?: following a leader or a tendency towards an uncertain goal. Conversely, being the first of a given set of people to come up with an idea that completely breaks actual molds is the element that makes the difference. However, if one chooses to follow someone in the exact same manner, breaking an original pattern just for the sake of doing it, one is no better than the mainstream trend.

For example, the task given for this essay is handed out to discern conformists from deviants, through a given idea that practically forces one to think outside of the box. However, the restrictions given and the idea in itself are so particular that there is not much to be said while also being original and keeping true to the subject. Thus, in an attempt to assess nonconformism, the idea merely pushes contestants to abide by the rules, delivering a lot of potentially unoriginal and repetitive essays.

All things considered, my opinion is that followers of a nonconformist trend are actually conformists. As stated initially, my belief is that a true groundbreaker is represented by his actions, not by the desire to be different. As for the others, the ones who actually want to be nonconformists, they are also special in their own way. Just as everybody else…