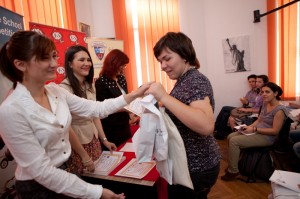 One small step for man, a giant leap for mankind- by Ioana Madalina Stumbea a student at CN Mihail Sadoveanu, Pascani

Thousands of years ago, one brave man tried and managed to tame fire; hundreds of years ago another one had the courage to stand up and rightfully claim that the Earth wasn’t in the center of the Universe; forty years ago yet another one lay foot for the first time on the surface of the Moon – these are past events that, like a potter playing in his rusty, termite-devoured wooden shed, have shaped our planet and our way of life; but in a rapidly-changing, ever-evolving world, what is that secret ingredient, that je ne sais quoi that allows people, concepts, wishes to move forward? It is that insatiable desire to learn, to help and to expand oneself.

For what is the difference between man and animal, and how can man call himself human if not by using his cognitive abilities to strive to enlarge his knowledge, offer his kindness and change his world into a better place – and here is what makes what nowadays is known as volunteering the simplest, most general win-win situation: it offers all those and more and it establishes the best type of connection between people, one based on joy and giving.

Volunteering is like a crowded, boisterous intersection, reuniting a great deal of paths one can choose in their life – studying, working, fighting for one’s wishes, hobbies – while leading towards the ultimate goal, that of sharing and helping others. It lets one stand exactly in the intersection and be part of multiple roads while managing to help other people that are not yet at or can never step into that intersection.

“Kindness is the language which the deaf can hear and the blind can see” – Mark Twain once said, enveloping this dimension of compassion in a layer of miracle and transforming it into a super hero out to protect everyone and everything, day and night. A volunteer is such a super hero, and our world is full of volunteers – which means our world is full of super heroes. They come in different shapes and sizes, with different super powers, but if Money makes the world go round, then they are the ones that make the World.

Now, the only question that remains is Are we also – can we also be – super heroes? and here comes the fun part – it is free of charge (and maybe you can wear one of those nifty costumes, too)! It will change you – and you will be able to change someone else, and so on – and maybe if we manage to gather just the right amount of super heroes, Neil Armstrong’s famous words will become something along the lines of “(A good deed is) A big step for man, a greater step for mankind”.