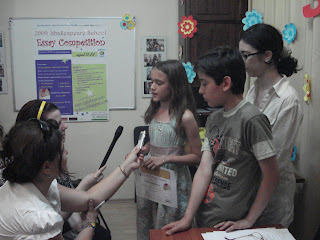 The land of one thousand rivers, where we find a half of the earth’s animals, the Amazon jungle has got a beautiful side and a dark one. This jungle is the most mysterious of all the places you’ve ever been. I know why, and I’ll tell you:

Two summers ago I went on a trip with my friends and my biology teacher, Mrs. Elena. While we were walking through that beautiful jungle we heard a noise and a capuchin jumped on my head. Then, it started to scream and other monkeys, big and small sized appeared! We ran as fast as we could and after five minutes of running… we got lost. One of my friends, Maya, started to cry and say that we will never get back home. While she was complaining and asking for her money back I spotted a yellow and black…think looking at us. Its eyes were shining of hunger and then I could hear it starting to growl. Then I understood what it was! It was my favourite animal, the leopard. But it was too close…

“Nobody should move”, I said, but Alex, a stupid boy in my class, started to dance, just not to listen to me! But something stopped him and he started to shiver:

The leopard was coming closer to us, so Alex did the stupidest thing, he ran away. Then the other kids did the same and so I did. The leopard started to chase us (of course), but it hit a tree and fell on the ground. It didn’t hurt itself and fortunately stopped chasing us.

After that we found some sort of a camp whit people dressed funny and with their faces painted.

“Wait! Maybe someone here is talking English”, I said.

“Hi, my name is Hohokikirikili, you lost yourselves, didn’t you?

He told us things about his tribe and that he is an Indian like them but he went to New York to learn some English. He went back here to take care to his family. He knew the jungle like a bold person knows his scalp, so he showed us the way to the cabin.

When we arrived there we realized that we were missing for about half a day. It was my best adventure ever!!!