A stroll on memory lane 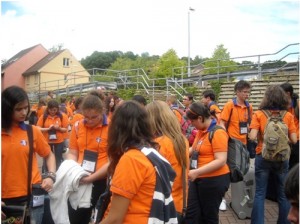 As I write this now, a surge of emotion rushes through me, threatening to overwhelm my senses. Images start jutting forth from amidst the swirl of memories. These are no mere memories, I should say, more like an echo of the intense feelings I’ve felt reverberating perpetually in my mind. It should feel hazy, but it’s not, as if it were only yesterday that I first set foot on foreign soil for the first time in my life.

How I got from the airport to the reception area of the campus I have no idea. I clearly remember focusing on the idea of being far from home and ignoring everything else that went past me. World War III could easily have sifted by unnoticed by me.

However, my shameful lack of perception was quickly wiped clean as a surprising new element wound its way into my ignorant skull – interest -. That is to say, I immediately felt like taking everything in at once. Taking my camera but leaving my wits behind, I thoroughly zapped every little detail, from plate numbers to buildings and even the sky and that was about all I did the first day because it was already late in the day. Very few things happened the first day, not even worth mentioning, unless you find struggling with unpacking an amusing idea.

The next day we had our first real contact with the Brits in the auditorium, that big oval room you tend to see in colleges. After a quick test, we were awarded marks and split into classes according to our level. 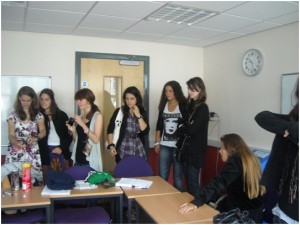 “What’s wrong with this picture?” Well it’s not the girls I can tell you that! It’s classes…nooo. Kidding. Classes are not what I expected. Instead of a dull, business-like atmosphere that you see in movies, our classes were handled in a slightly different approach. By “slightly” I mean interactive, fun yet very educational at the same time.

The campus itself just blew me away. It was like a wild reservation, only with less deadly creatures and more civilized appearance. Don’t get me wrong, I totally loved it. This is exactly my thing, getting away from the thrashing and noises of urban life. 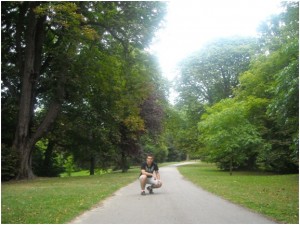 But on top of all that, what I loved most were the people themselves. People from every country seemed not only eager to meet foreigners, but delighted to have the chance to engage in a cultural exchange. This is when I started feeling ignorant and ashamed of myself for even daring to think that I knew something that was so far off from the truth.

That being said, those two weeks feel as real to me now as they did then and that’s all down to you. 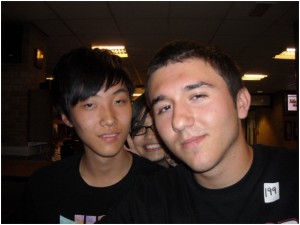 “Proper good job mates”, as the Brits would say.