For a day in Wonderland- by Manoliu Madalina, student at G. Cosbuc National College 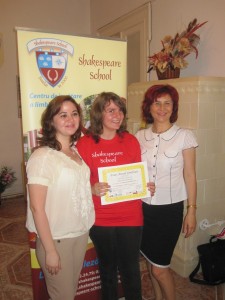 It was a quiet summer morning. The summer holiday had just started and my parents decided that my sister and I should spend some time in the countryside with our auntie. Although she’s pretty old, she knows amazing stories about talking rabbits, Mad Hatters and big-headed Queens, and this is why I love her so much.

While I was reading in the garden, the earth started shaking and a huge black hole appeared in the middle of it. After things calmed down, I went to see what happened. A wrong step and I fell into the dark.

As I was falling, I thought that I’ll never stop. Just when I was about to panic, I landed safely on the top of a pile of leaves. Immediately I realized that I wasn’t in Newbury anymore. It seemed like I was in the middle of a forest. Being confused, I decided to follow the path that led deep in the wood and see if I can find anyone.

While I was walking, a strange man appeared out of nowhere, right in front of me. He asked me if I want to join him for a cup of tea, and so, before I realized what I was doing, I accepted that man’s invitation.

After a while, we were standing before a huge table. A March Hare was waiting for us and just when I wanted to sit, it started yelling:” You’re late for tea!!”. The Hatter (that strange little man that invited me to tea) started laughing and told me to hide under the table. I didn’t listen to him, but, when a tea cup flied too close from my ear I panicked, so I started running trying to avoid the flying cups.

In about 10 minutes everything calmed down so I decided to sit down and enjoy my tea. I found out that the Hatter was a talkative person and he taught me lots of stuff.  For example, he said that whenever my clock isn’t working I could try and put it in some tea. I laughed when I heard that absurdity but he seemed like he was talking seriously, so I promised him that I’ll try that as soon as I get home. Immediately, The Hatter turned grey and asked me if my aunt was Alice. I answered him that indeed, my aunt’s name was Alice…. In the next second The Hatter gave me a cookie and he made me eat a small piece.

As soon as swallowed that  sweet piece I realized that I wasn’t in “Wonderland”. I was again standing all alone in the garden…. Maybe aunt Alice was actually right…magic places can exist… Anyway I am going to discover the truth… No matter what. 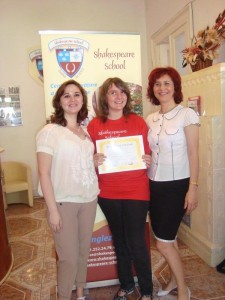