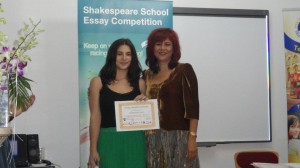 If I were a conformist teenager, maybe I would have paid more attention to the rubric. I might have even adjusted my essay to the topic. But I’m not. I’m as nonconformist as it gets. I’m milk with a sugar cube. Maybe with ice-cream, if it’s a late afternoon and it rains heavily. I’m a long espresso if I don’t sleep for a night. A short one if I lose two. I’m a frappe when I’m out with my friends. A cappuccino when I’m out with my boyfriend. I’m in 4 colours before I start writing, because I only drink 2 and let the others inspire me. I’m irish when I don’t sleep at home. I’m black when I’m blue.

I’m a child of the Think Pink generation, but I belong to the Think Coffee one. We are coffee drinkers, after all, don’t tell me otherwise. Do you drink yours with or without cream? It doesn’t matter, though. I just like guessing what kind of coffee suits each one of you. That gentleman in front of you, for example, the one with a hat, he’s half milk. The girl with the headphones on is a moccacino. Your sister is a viennese, isn’t she?

When did we start drinking? Coffee, you mean? I don’t think it was a specific moment in time. I assume that, one day, we decided to care about what we had heard so many times about us. Well, nobody said it to our faces, but we heard, don’t think we didn’t. That we lack ambition, that we don’t work enough?And suddenly we had more dreams than hours and time began to shrink, until it was no longer than an espresso. So we threw away our wristwatches and we turned the night into a lightless day. And we just kept on going until we thought, hey, if we lasted so far, we should mix some coffee with an energizer and go celebrate. After about a week we started enjoying our new lifestyle, work, nights, coffee and all.

You don’t find it bitter, do you? I have a friend who wouldn’t drink because of the bitterness, so I taught her to make a macchiato. She hasn’t stopped since and her writing got better. She only writes at nighttime now, and on lots of coffee. Just like Eliade, and you know how well that worked for him. Her sleeping is bad, on the other hand, but we’ll have loads of time for that later. We’ll buy ourselves some yachts and we’ll sail around the world, sleeping on the deck and getting sunburn. But not yet.?

Now we’re young and they keep reminding us that it’s our time to shine. And that cannot be done by following some rules. Any rules. You just have to learn to tell the breaks from the accelerator pedal and just keep on driving. Coffee breaks are always welcome, though. And never too many.