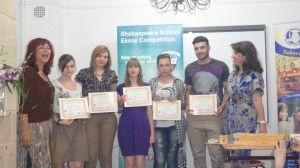 Klingons, Math and a little bit of Poirot (or maybe a slightly bigger bit), by Ana-Maria Vasilache

Hmm? So you want my opinion on today’s nonconformism? Well, the problem mentioned can be reduced to numbers (I am more of a mathematically minded person so this is the first thing I can think of when I am given a knotty statement). If you saw a number of people wearing klingon costumes (I am also madly in love with Star Trek movies), would you still say they look, act and are ordinary just because there are more of them? I strongly believe you wouldn’t. No matter the number of people taking part in this scenario, you wouldn’t believe they are drearily similar or ordinary (and this isn’t another of my Math problems). Actually, given the circumstances, I believe the bigger the figure, the more attention the peculiar gathering would receive.

?Yes, but this is only a particular case!? you must argue. ?They are all together so they catch the public’s eye and so they gain the presumption of being nonconformist. This pattern is not extendable to other cases?. ?Oh, but it is, mon ami? as Poirot would say while rubbing his ?petite? mustache with his fingers, playing with his hat and using his famous grey cells. ?Yes, it is.? (Have I failed to mention how much I love Agatha Christie’s books?). What about the moment when you see one klingon in the street? OK, not klingons again. Let’s take a more widespread example such as ?. What shall that be? Hmm? I know! What about a punker (you know, the traditional one, with piercings and spikes)? You know there are thousands, maybe millions of them out there, so, because of their group’s number of members, would you consider any of them to be as conformist as any other teen wearing jeans and an old T-shirt?

I feel you are not yet swayed. We haven’t talked about the fashion industry, have we? And what about all those kids trying to be different while buying clothes from the same stores and thus becoming more indistinguishable to each other than they have ever dreamed of? I believe this is utterly improbable. No usual person would ever replicate a combination of clothes presented by a magazine or shop. One shall always change something. Not to mention that the same garment can be worn in at least one hundred different ways. Come on, didn’t we learn anything from superheroes wearing their underwear on the outside? And if speaking of more typical examples, a simple top can be worn as it is (but most teens find this rather boring), can be ragged, knotted or chopped to make it look more ?fancy?.

Considering that I have derailed from my subject for long enough, I believe this is where I ought to stop. To sum up, nonconformism is rather evanescent, but what truly remains is the uniqueness that lies in all of us and in the moments we live.