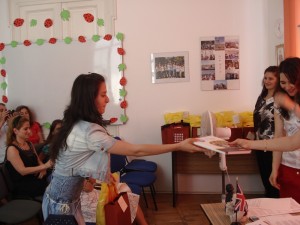 I always thought that, if there was another world besides ours, that world would be a perfect one.

One hot summer night, when I was getting ready to go to bed, I felt a nice floral smell coming through the window, so I went to sleep with my window wide open. A few moments later, I saw a tall, blue creature staring at me. I felt numb and unable to move, so I allowed it to take me with it and fly away.

A few minutes later, I noticed we had left Earth and had landed on a planet named Pandora. I then realised that the creature was Neytiri, my favourite heroine, princess of a race called the Nav`I. She was there, right in front of me, even though I couldn`t believe she really existed.

I must mention that ever since I had climbed up the strange animal that had been our carrier, I looked just like Neytiri: very tall, blue skinned, wide nosed, with sharp ears, a long tail, and almond-shaped eyes.

On Pandora, everything was calm and peaceful. I thought it would be beautiful to see their most precious place, so Neytiri took me to a sacred place called “ The Tree of Life”. We even had to fly to get there. She taught me how to fly using a tamed animal. During one of the journeys, I could see snow-covered mountains and crystal-clear waters, with the fresh scent of pines and the whistle of the cold wind touching my skin. Not to mention that the feeling of domination the animal gave me and being absolutely free was overwhelming.

Then, I felt very curious about how life on this planet was. Neytiri began telling me that all the tribes on Pandora lived peacefully with one another, even though they had different lives: some tribes lived in trees, others in the sea and others on dry land. However, despite all of these differences, they lived happily and respected their traditions.

I asked Neytiri for a souvenir that would bring pandorian peace and harmony on my planet as well, and Neytiri gave me a branch from the Tree of Life to take home with me…

…and suddenly I woke up. At first I felt confused, but then I knew that it hadn`t been just a dream because there was a small scented branch on my pillow. I remembered Pandora and its princess, Neytiri, and thought that she would make the perfect heroine in our world: a strong character that treasures happiness and harmony more than material wealth.