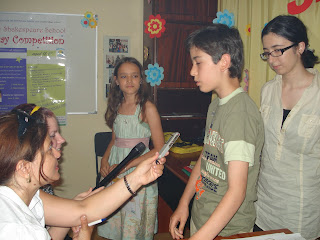 Last week I went to the circus. It was great: acrobats, jugglers, clowns, and especially animals. There were huge elephants, lazy camels, beautiful white horses, a slim giraffe and a shy kangaroo which hopped around the arena.

It was getting hot and noisy under the circus tent and I was very very thirsty. The children all around me were screaming, clapping their hands, eating popcorn, dancing to the loud music.

Suddenly, there was a small monkey on stage. It had big eyes like saucers and a thin tail. She looked very sad and she covered her ears with her small hands. The kids in the first row threw popcorn and paper balls at it and the monkey had nowhere to hide. She rolled into a ball and stayed there. I couldn’t stand that, so I went down to the arena and picked her up. She opened her eyes and smiled at me.

I felt a little dizzy and when I looked around all the people were gone. There were giant green trees and lianas everywhere and a big bird with an enormous beak screamed into my ear. My blood froze when I saw a black tarantula creeping under the leaves, but I had no time to cry. Many little hands grabbed my legs and I was flying upside-down through the jungle like Mowgli, carried by a troop of monkeys.

They took me to their king, in the heart of the Amazonian forest. He said:

“Thank you, my boy, for saving my little daughter. She was caught by bad people and you brought her back. Because you saved her life, I will give you the power to understand the language of animals and birds.”

It was great! I could now hear the panthers planning their attacks. I could avoid the snakes which hissed in the grass. A little poisonous frog told me about a treasure hidden under a tree and when I dug there, a thousand precious stones hurt my eyes with their shining rays.

I covered my eyes with my hands. When I opened them, I was in the circus again, and my sister was dazzling me with her multicolored magic wand.