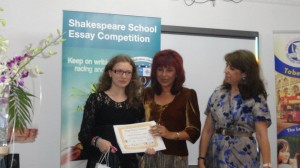 In her shoes, by Laura Ghitoi

? ? ‘But Mom, I really want those Converse shoes!’

? ?So, this is how my day ended. Going to bed angry with Mom. I wish I were her for at least a day so I could buy myself all I wanted!

? ?As always, I spoke before thinking. Poor me!

? ?I woke up the next day at 7 a.m. Nothing shocking by now. Again, me and my big mouth! I actually woke up in my Mom’s body! Silly wish?

? ?I had to dress up quickly with some random clothes so I could ?go to work, I tried to catch a tram because I remembered I didn’t know how to drive, I had to read a huge amount of e-mails, I had to do lots of Excel charts (my personal way of doing my Mom’s job), I had to deliver a presentation, I quoted motivational John Maxwell stuff, I had to attend a board meeting (I pretended to be sick but that didn’t work out) and I drank coffee until the jukebox ran out of it.

? ?But my Mom/ the child I was supposed to have had a surprise for me: a brand new pair of Converse shoes, the very pair I wanted so desperately! I was so shocked of Mom’s gesture that I even forgot that my supposed husband wanted chicken soup, that he had bought whole ?meal bread instead of normal bread and that he forgot to pick up ‘the kid’ from her math coaching.

? ?In the end, I realized my Mom is the hardest working person I’ve ever known and that she loves me enormously.

? ?I wouldn’t change anything about her (except of her dull pants, her over 30 old-fashioned sweaters and her ugly shoes).

? ?I also realized I don’t want to handle my Mom’s adult life again. Even though she gets to have her own car and a Visa!