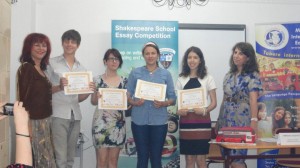 A day amongst the clouds, by Diana Stoean

When I came back home, I found my dad?s pilot cap lying on the chair in the living room. I took it and headed towards the mirror on the hallway to admire myself.

While I was saluting my reflection, the dashboard of a helicopter appeared in my mind. It was full of machines, levers and something-o-meters, and to my right was, of course, the co-pilot. The sky was clear, except for a few soft white clouds and the voice from the headphone was telling me it wasn?t windy and that I could get going. Smiling, I adjusted the chair, pressed a few buttons and ventured into the clouds.

The helicopter rose with its blades hitting in the cold winter air. Everything was prepared for?

Hold on a second, I said. Where are we going?

We?re doing a rescue mission today, answered the co-pilot. A skier got lost on a steep slope.

I started, determined to save him. I flew over the high mountains, covered in snow and pine forests. They were full of people who looked like dots sliding up and down the paths. Finally, I reached an empty skiing track, crossed by mountain rescuers. Further away, amongst the fir trees, there was a man in a red jacket, a skier undoubtedly, who seemed to be lost. I descended until we could help him up in the helicopter and took him back to the cabin.

While I am looking at my uniform with pride, I hear a knock on the door. I answer, surprised, and I see? me. I?m smiling and talking non-stop about my day at school.

My dream falls apart around this image and I wake up smiling at a girl in a mirror who wears a pilot cap.