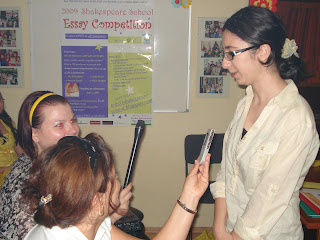 What makes a blog successful?

I kept asking myself this question for an hour, while I was trying to read the novel my teacher assigned us by tomorrow. If the hero had a blog, it would have been much easier to express his feelings, rather than trying to comite suicide so that the object of his affection wouldn’t mock him anymore. But those are old days, now people are making comments on YouTube, Twitter and writing online diaries. Nowadays we keep in touch with people we never met and share opinions with others, hiding under a username that has no connection with the real us.

We keep online diaries (=blogs) with the hope that people will come to read and support our opinions, making us feel less lonely in a world that is moving too fast. Some blogs are more successful than others and we ask ourselves why. Is that some people are brighter and more popular or they simply know better how to express themselves and how to interact with others? I think is the second option. Starting with the reason why you’re doing it. Not because it’s “in” or “cool” (if that’s the reason, it’s easier to buy a fancy dress), but because you want to, because you have something important to say and share with others. Once you’ve started a blog and written an article you should attract visitors. Here comes the difficult part. Some users are guided by the quote “Make sure you have a different opinion and people will talk about you” trying to shock by publishing rumors and articles that don’t represent them and have no connection with the real life while others send an overwhelming number of emails that are just annoying and useless. Submitting your blog to a regular search engine is easier and it doesn’t ruin your reputation as a blogger, making one in the blogosphere is hard but once you did it, things become easier.

An important rule is the feedback. A blog without comments and feedback is no blog at all. The comments are stating that people do care about what you say, even trough the feedback you receive is not always positive, you should always learn from your mistakes and take into consideration people’s opinion. Another rule is making a good, lasting impression. An original layout and a witty, catchy tagline are always helping your blog to have a big visual impact.

Even trough some of us are predicting that blogs will become so successful that they will replace mainstream media we should take into consideration that after all, they’re just…blogs where normal people are expressing their thoughts and emotions which are only one part of the story, showing just one angle of the reality we’re living in.