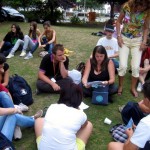 Now this is rather awkward, I remember thinking as I fiddled with the plane ticket and looked at the 24 unknown people that I was to spend my next two weeks with. More than a month prior, I had (to my huge surprise, to be honest) won Shakespeare

School’s Essay Competition and this had been my prize: fifteen days in the Oxford Brookes summer camp. Fifteen days that I was completely underestimating while fiddling with my plane ticket and that now, as second-rate as this may sound, I couldn’t possibly overestimate.

The awkwardness was natural, I would soon come to realize, and this timid apprehension is what our first days were all about. Obviously, analyzing each other, politely discussing the cloudy weather, sometimes sharing opinions on the British food and shyly avoiding most foreign people. We dragged our feet to our morning, afternoon and evening activities, often sleepy, often mumbling about something, often counting the days left until our flight back to Romania. Then, at some point, something happened – though I couldn’t say what or when exactly; the bubble burst like a piñata and suddenly I was making Portuguese, Polish, Spanish, Italian, Croatian and English friends, suddenly we spent our evenings together, laughed heartily at the inner jokes we developed, made the most out of every single activity.

The daily English classes were a completely new experience and I doubt they could have been any more different from what I knew. Our teachers were quite young and open-minded and mostly focused on an interactive way of teaching, encouraging us to communicate as much as
possible and to share our ideas and interests with the others. (For a little piece of trivia, the E – from Excellent – classes were made up exclusively of Romanians and Portuguese, so our English level was clearly above the European average.) Thus, besides the improvement that I could notice in my speaking abilities, I have also acquired some fairly solid knowledge on Portuguese and British characteristics, customs and so on. 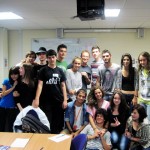 We visited the centre of Oxford on numerous occasions, enjoying both the average social areas of the town and the more important and famous landmarks, like Trinity College, Christ Church College or the Eagle and Child Pub (where The Inklings, a group of writers including J. R. R. Tolkien and C. S. Lewis, used to meet). We were also taken on a trip to London, a breathtaking city constantly buzzing with such a strange mixture of history and modernity, and on trips to the Blenheim Palace, to Cotswold Wildlife Natural Park and to Thorpe Park, which was definitely one of the highlights of the camp (despite it raining cats and dogs). Another highlight was, surprisingly, seeing Oscar Wilde’s The Importance of Being Earnest acted outdoors by the Oxford Shakespeare Company. No one was really looking forward to it, as theatre is universally deemed “awfully boring” among people my age, but once the play started, you could see that everyone was listening and watching attentively, captivated by the artistic talent of the performers, together with the cozy, British atmosphere of the garden. Thankfully, rain spared us this one time.

And then, just as suddenly as it had begun, it ended. It’s hard to put it down on paper, but it was, for lack of a better word, heartbreaking. We had become such a tightly-knit group and we were obviously quite shocked to realize we had to part ways and that there were some among us that we would never see again. Call it multiculturalism, a social mosaic, transculturation or any other fancy term – there was so much more to it than that. The hugs, the laughter, the (stolen) meal tickets, the hushed whispers in a language you didn’t always understand, the adrenaline-loaded meetings at 4 am in the morning (praying the staff wouldn’t find you), that little universe we shared for two weeks, and poof! thin air. And there I was again, fiddling with my plane ticket, teary-eyed, overwhelmingly grateful for having had the opportunity to learn so much, to grow so much, to meet such extraordinary people. Thank you for that. 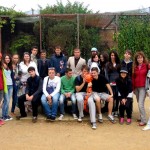