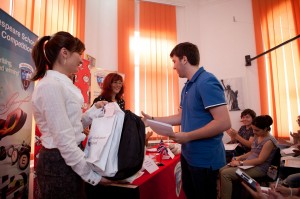 These days, tottering to its fall from the
confines of reason wavers the concept of “volunteering”, the presumably selfless act of helping your peers in need. But what are the implications, if we are capable of acting with an ultimate goal of increasing another person”s welfare, if the potential to be altruistically motivated is part of human nature? Specifically, what are the faults of this concept, the ways in which they can be rectified and how can volunteering actually improve society?

Magnanimous help is so often proclaimed as a social panacea that I have subjected it to a careful criticism and indicated its defects when regarded as a complete embodiment of altruism. Some of those defects are incidental. Since it is an affair of human beings it cannot fail to show the imperfections characteristic of such wayward creatures. Seldom does even the smallest gesture of help attain full commitment. A volunteering action is an accomplished work of art, yielding large rewards through all its progressive stages for all those involved.  Unwatched, it, slips into aloofness, apathy and indifference. These defects of “helping” are, however, but incidental and such as common in all man”s undertakings. There is nothing in volunteering which can render it immune from human infirmity: pride.

But there are also in it certain fundamental defects which prevent it from becoming an organizing world-principle. Before it can weld individuals into societies and unions it must undergo large transformation and appear rather as social justice than domestic affection. For help is not selective and individual, picking out one and rejecting another. Altruism ought to offer its bounty alike to all, regardless of age, race, ethnicity or condition. From such limitations it needs to be freed before it can become formative over society. All that is conjunctive in it must be retained and only its exclusions removed. In this way general justice will supplement individual purpose.

Vaguely, waveringly, and with but a half understanding, I believe volunteering ever guided the best endeavors of mankind. The dangers that might emerge I readily wish to be obliterated. A genuine volunteer should be protective, generous, identifying impulses as successively different aspects of the altruistic life. Championing for the ideal that “a noble spirit enlarges even the smallest man”, it behooves him to proceed, picking to pieces a concrete whole, for everything commences with a small step. Volunteering is more closely compacted than our expositions. Higher and lower stages move forward together, assisting one another. In conjunction, the higher altruisms ennoble the lower and are themselves enriched and diversified by whatever inferior stages they absorb.  I studied the mechanics of volunteering merely to find a place where each may be helpful to all.

Pondering on it, my conclusion would have to be that the best way volunteering may aid society is by developing a civic conscience, imperative to be kept awake at all times to safeguard its weak, its ill, its “tired, poor and huddled masses”.