Hoping for a brighter tomorrow (III)

The second week at St. Michael’s College was so good! 24 chinese people came! 24!!! It’s really strange when you look around you and you hear so many languages, some that are complete strangers to your knowledge!

On Monday, we had the bird show, so for the first time I held a hawk, two owls and a faulkner on my hand! And that man was also having a TV show, on Animal Planet! He was shooting (camera shots, I mean) tigers in their natural habitat and catching all the bad guys, that were traying to kill the poor huge cats! Great man…

That night we had the funniest most spookiest of experiences! As the girls were getting ready to go to sleep, I was reading and Sara was listening to some music, the fire alarm broke off! We have made fire drills, we knew what we had to do, so we weren’t alarmed… too much! Still, I took my backpack (always my backpack…) with me! Just in case! We got out in the chill of the night, some girls in their slippers, others with their hair wet, but I guess we were all there. It turned out to be a false alarm, so it was a night to remember! 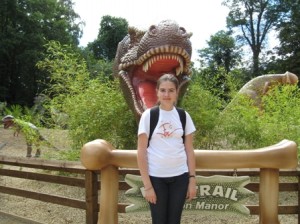 Well, the next day was just as usual and dancefull and fun as always! But… I found a piano!!! Yes!!! And because it was in a room not visible from the hall, I think I became “The phantom of the Piano”! It’s strange since this school is very old and I only played “Pirates of the Caribbean” and “ Lord of the Rings” songs! And some of my own compositions… It was so much fun to see 10 coreeans enter the room without warning and then say a shy “Hi!” and then leave! But I had so much fun with some of the more little girls around there! They were so excited about “The Pink Panther”, that I had to play it for about 5 times!

I almost finished “Little Women” that I borrowed from the Library here! It was such a delight to see, on the very first day, a Lord of the Rings poster there, hanging on the wall! Really made my day!

Wednesday! The great trip to London! We woke up at 5 a.m. in a perfectly British sunrise, with a “Pride and Prejudice” look in it! Mist over the fields, “Nara” by E.S. Posthumus singing in your ears (the others were too much yet-asleep to talk) and beautiful, sleepy towns all the way! Everything was so sleepy, that I fell asleep myself after about an hour!

We had breakfast in Oxford and for the first time, I drank Starbucks’ hot chocolate! Delicious!

In London, we were all gathered and we took a walk ( pretty long, but useful) around the Houses of Parliament, the Big Ben and then… Buckingham Palace! The flag was up high, so the Queen must have been there!

We got to Trafalgar Square where we took some pictures and those who were to go to the London Eye left. Of course, I was one of them!

We waited there for about two houres before we finally got ourselves on! But it was worth it! We saw the entire London from up there!!!! Loved it!

And when we got off, I made history! I took a picture of myself and the Big Ben from the same spot my parents took one of themselves 16 years ago! Magical….

I was only sorry we couldn’t visit the Film Museum! They were exposing Star Wars costumes! Well, better luck next time!

That evening something happened! Thinking back now, it was fun, but at the time, I was a bit scared! At 9.45 p.m, I left the party (my feet were aching) and I went to play the piano! It’s said “Time flies when one’s having fun”, but I never would have thought it more right than then! Why? Because suddenly the lights went off! They were closing the school! I grabed my backpack and went on the corridor. Stillness, darkness… I went to the front entrance but it was locked! I wasn’t scared of the thought of just having to sleep there (there were no thieves, no nothing), but sleeping on a dark corridor, with no lights, without any signal on your phone, that wasn’t the most comfortable option! To my relief, Mr. Meadows, the course manager was still in and I think he was rather amused of my face! He started talking about the ghosts in the school, but he let me out, so I didn’t have to find out on my own if there were any ghosts there or not!

The rest of the week went just as good! I went to the cinema to see Toy Story 3, not that I couldn’t see it here at home, but I wanted to see the British cinemas! Great place!… And I also got the chance to buy chocolate-covered raisins!

On Friday we went to Worcester and bought myself some more books (“A guide to Middle-Earth”, that was a “must” and “Claire de lune” by Debussy). That evening we had grill at dinner and Lucy, Elisa, Johanna and I ate (together) fifteen chicken legs!

Saturday… Cardiff! One word: breathtaking! We visited a beautiful castle and then we went shopping and I bought myself a blue blazer, to Anete’s amazement! I also bought a glass doll, dressed in the Welsh national costume!

And after months of searchings, I finally found “The Book of Lost Tales” by Tolkien!!! 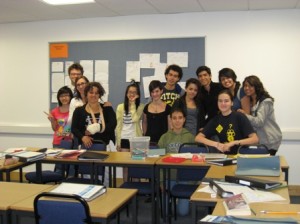 That evening was memorable! Goodbyes all around! Everybody was getting ready to leave the next day! Poor Lucy was going to be in the same car, for 3 hours, with Nikita, a very annoying Russian boy! Everybody was taking some last moment e-mail adresses, phone numbers, photos of each other! I was sad I had to leave! I didn’t want to leave! But since “precious things come packed in small packages”, it couldn’t last forever

Last minute gifts for Elisa, Anete, Johanna, Lucy and Sara, hugs… and goodbye St Michael’s College! And after just some other houres, I left British teritory… Forever? Less likely! I bet I’ll be there again soon!

In the end, I can’t thank Shakespeare School enough for this opportunity!

I was glad people liked the way I talked! It gave me confidence in my own strengths!

So that’s my trip to GB, where I enjoyed meeting a lot of people from all over the world and speaking in english for two weeks,

Now, the essay that caused all this (winning the national competition, going to GB…) I kept on developing it and will be soon a long novel!

So… Thank you, Shakespeare School!